The standard model of distillation can be used to determine atmospheric emission for following operations:

For distillation emissions modeling, it is also necessary to consider the other emission steps (other specific models proposed by Envmodels can be used):

Following picture presents a condenser used for working with liquid reflux on a production reactor. 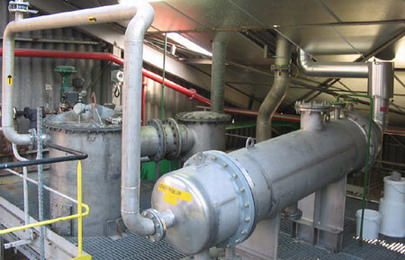 Distillation model is based on the following assumptions:

An industrial process is used for distillation recovery of waste toluene. The number of treatment operations is 50 per year.

For each batch the conditions are:

Calculated emissions of toluene emitted from the process system during distillation step are:

Emission from other steps (charging waste toluene in distillation vessel and recovering distillate in a receiving vessel) can also be calculated by application of standard loading model proposed by Envmodels (saturation factor is 1.45):

Thus, yearly emissions for all distillation process are: 41 kg of toluene